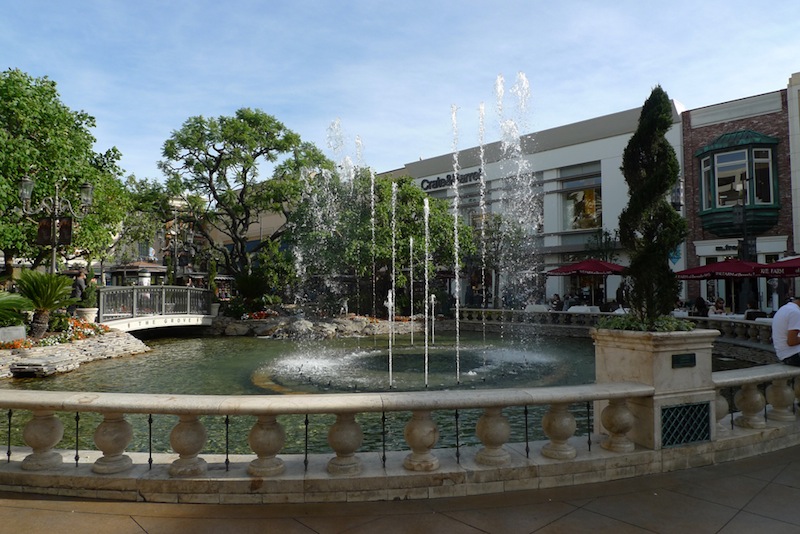 In cities all over the world, there are shopping districts where urban dwellers flock to meet up with their friends, stare at beautiful things, and perhaps even buy something they want (or, GASP!, need).

Tokyo has the Ginza.

And here in Los Angeles, we have The Grove.

But what exactly is The Grove? Is it a shopping mall where we find the newest treasure? Is it a community space where you take your children to play? Is it a terrifying dystopia where every childhood fear I had about the future comes true, in vivid color and sound? Where nightly, I am chased down alleyways by blasting Frank Sinatra tunes that harken to that Annette Benning mental breakdown scene in American Beauty? Yes. Yes it is.

I’ve always had a complicated relationship with The Grove. Some of my first memories of coming to Los Angeles in my teens involved going to the Farmer’s Market with my friend Alexis and getting fruit that we would eat whilst sitting next to her parents’ pool in Hancock Park while listening to the soundtrack to Run Lola Run and thinking about how arty and weird we were. A few years later, when The Grove opened, some of the charm of the Farmer’s Market was lost as the entire area became one giant traffic snarl. A sea of shoppers talking at elevated decibels about who slept with who and where you bought that statusbrand leather clutch.

While it has its faults, there is something inherently appealing about The Grove. For me, it’s pretty much grown up Disneyland. Which I like, since I always loved Disneyland as a kid. There is something very reassuring about going to a space where there is a collective agreement to believe in an artificial reality so that everyone can have fun and forget that just a few blocks away there’s a shopping district where smutty stores that sell Doc Martens sit next to pot shops (“We’re going to Melrose!”).

But seriously. What is The Grove? Why do we need it? Why is it so popular?

The obvious reason is that there is nowhere to meander in Los Angeles (aside from our wonderful hiking trails, which aren’t necessarily something you want to visit on a daily basis and/or a first date). Angelenos like The Grove because we can get out of our cars and walk around like people in more densely populated cities do. We can take a stroll to the bookstore, grab dinner, and maybe catch a movie, all in one tiny fake small Main Street USA.

The comedown at The Grove is always the same. After hours of walking around hand in hand with you friends/boyfriend/mom, you return to the massive parking garage, which holds the same number of cars you’d find in many small countries. Getting out of the garage is always a nightmare, winding through the labyrinth of “Exit this way” arrows, past waddling shoppers who somehow all happen to have a double-wide stroller, regardless of whether they have a baby or not. It is natural law that there is always traffic on your way out of the parking garage and that your erratic driving always incites an argument with your boyfriend. Or maybe that’s just me and my anxious “get me out of here right now” parking garage philosophy.

Here, I must admit a deep dark secret about myself. I am a reformed Grove Snob. I’ve always hated The Grove, looked down on it for being fake. We live in Los Angeles, why pretend we live in a corporate version of some small town’s turn of the 20th century main street, a main street where Gays would probably be looked at sideways if they held hands or flaunted their blatantly homoerotic Abercrombie & Fitch bags the way we do at The Grove?

I know what you’re thinking. If I hate The Grove so much why do I go there? If you are a social person in Los Angeles, who likes going to the movies, meeting up with friends, or eating, you will likely be forced to go to The Grove at some point or another. It’s unavoidable. Ultimately I’d rather hang out with people than sit inside fuming about how I don’t like a particular shopping center.

Yes, I’ve spent many a year hating and judging The Grove, belittling it as a bourgeois, suburban, and offensively unrealistic. And yes, it is these things. I probably am too. The Grove is an inherently superficial and money-oriented place. As it should be, it’s a shopping mall. But in addition to being a gross place that attempts to drive consumers to purchase things by surrounding them with a fake, idealized world,  The Grove also represents our very cultural aspirations. We want to walk around. We want to live amongst buildings that look like European-inspired early American constructions. Essentially, we want something completely different from the expansive, spread out world we’ve created in cities like Los Angeles and in the majority of the United States. We’ve realized that as car culture has given us freedom and mobility, it has also trapped us in our cars and prevented us from walking around the way human beings were supposed to.

The Grove has taught me many lessons. The first one, is maybe you shouldn’t overanalyze every single thing you do every day, fearful that you’re playing into some sort of terrible plot to destroy the earth and make tons of money for huge corporations owned by greedy Republicans (hint: you are).

The second thing I’ve learned is that hating The Grove is obnoxious and it bums people out. I learned this while visiting it with my friend Peter. He was all “I like The Grove.” And I was all “Like, actually, like, or like, ironically like, like as a joke?” And he was all “Like. Like, actually like.” (side note: we actually talk like this. Sorry). In the end I decided it was more important not to be a judgemental freak about The Grove and just get over my deep-seated hatred of it. I know a lot of intelligent, thoughtful people who like The Grove so it must be fine, right? Or have they been brainwashed by Mario Lopez and the cast of Extra? That show films from there on a daily basis, I’ve seen Mario there, his skin is so perfect it looks like flawless caramel.

As you get older you start to realize your adolescent cynicism needs some policing. This is not to say you shouldn’t think critically of the world around you. It is to say that you should pick your battles, and perhaps bagging on a Disneyfied shopping mall that everyone else thinks is fun isn’t such a good use of your time.

If you did a CAT Scan of my brain, it would look something like this:

I’m assuming that you’ve all seen Ghost World, from which this still, and most of my internal dialogue, derives. If you haven’t seen it you’re not truly a human being. Stop reading this. Find it on iTunes or whatever, watch it, and then come back and finish reading this long, drawn out post. Anyway, the two girls in Ghost World represent the two sides of my brain. There’s the Thora Birch side, which is cool, weird, and witty but totally a bitch. And then there is the Scarlett Johansson side. Which is nice and sincere but way less funny/interesting than Thora. Life is about finding the balance between Thora and Scarlett. It’s about being just witty enough to be interesting but not so biting that you hurt people’s feelings. So don’t bite people who like The Grove. They’ve just let Scarlett take too much control over their brains. In other news, how much do you miss that cute little Scarlett Johansson? Before she got all uber pretty and, like, vampy and over-the-top sex kitten-y? I kind of do.

Ultimately, my journey towards accepting The Grove has taught me to stop being so uppity about things that aren’t necessarily a big deal. Yes, it would probably be better if we all farmed our own organic food and lived in communes where we all raised our children together (that is my dream life, btw). But that’s probably not going to happen. Probably we will continue to live in cities where we go to places like The Grove and buy stuff. And the best thing we can do as people is to try out best not to destroy the planet while we are doing this.

So go to The Grove, enjoy it. But maybe make a snarky comment or two about it just to remind yourself that you are alive. Just so you know you haven’t lost your Thora Birch Ghost World edge.

16 thoughts on “How I Learned to Stop Hating The Grove”