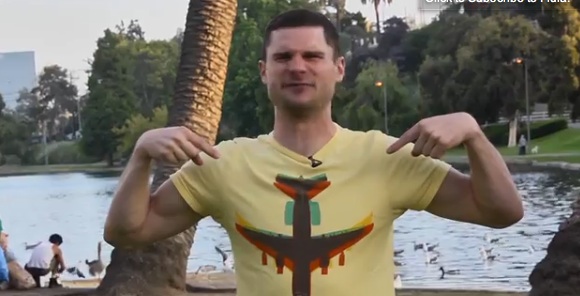 I had no idea who you were until yesterday, when I discovered you on one of my friends facebook walls. It seems like you’ve been around for quite some time and might be late to the game but I’m happy I found you. You are the funniest person in the whole world. For those of you who don’t know Flula, he’s a German DJ/comedian who lives/works in Los Angeles. At first I thought his German accent was a put-on, but apparently it’s real. He’s super witty and ridiculous, which is evidenced in the videos below.

This is a fake ad for a soft drink. Awesome. “DANCE!”

Flula screaming about the Rapture.

This is a random video about a badger. It will fill your heart with joy.

In conclusion, I regret every moment that Flula existed before I found out about him but he’s my new favorite person in the whole world. He’s insanely entertaining. I have no idea what his music sounds like but if it’s anywhere near as genius as his comedy I’m totally into it.